Why You Should Buy A Rotating Car Holder For Mobile?

Atlas robot is a mechanical human developed to operate in rough terrains. It has the capacity to switch between walking with both feet and limbs and only using feet just like humans. When walking in bipedal posture, the hands can lift objects and manipulate through the terrain to clear the way especially in congested placed. The hands have been designed to work the same way as human hands and even use tools in the same way. The whole robot is made of 28 joints activated hydraulically, a torso, arms, two hands, feet, and legs. The head has been installed with cameras and a laser array finder. It is powered by a tethered offline electric power supply.

Alphabet owned Boston dynamics who are the developers of Atlas robot have for a long time been refining this mechanical human. The latest version of this robot is the most impressive in terms of operation and effectiveness. It has been made smaller that is around 5’9’’ and weighs up to 180 pounds to allow it navigate smaller spaces and improve mobility especially when it needs to be carried around. The previous version weighed 330 pounds and had the challenge of being moved around. What has however wowed many people is the fact that it is powered by batteries meaning it is completely wireless. 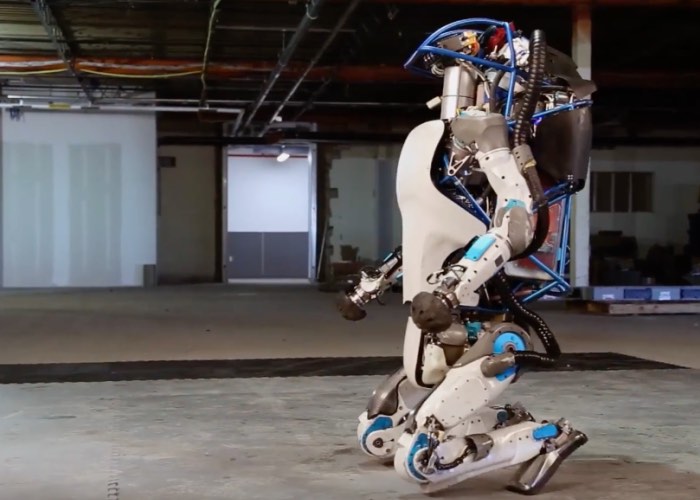 This robot has been developed using the latest technology such as the installation of sensors to bring balance between the legs and body. Stereo and LIDAR sensors installed in the head assists in navigation and these are so accurate such that the robot is able to avoid obstacles without human intervention. The only thing that is considered to be missing in this innovation is its ability to defend itself from physical abuse. This lack of intelligence is what makes it possible for humans to push them over and knock off the items they are holding. The developers are however working on an artificial intelligence system that will create a defense system in the robots.

The LIDAR balancing system is so effective such that the robot has the capacity to run and do other vigorous activities in bipedal position without losing balance. The most amazing thing about its balancing feature is the speed with which it manages to run. The only thing that can make it lose balance and fall is an unexpected push from behind. With the sensors in its head, it is able to detect obstacles from a distance and find an alternative route. With this kind of intelligence, it tries to find the easiest option.

It is still not clear whether the Atlas robot is completely autonomous since the LIDAR seems to be dormant when outdoor. This could be an indication of real-time human assistance in the whole process. The lifting of objects is however completely autonomous until it starts stacking them on the shelf, that is when it is suspected that the robot is once again aided by humans. The precision with which it places stuff on top of each other makes people doubt that this not so intelligent machine could be using pre-programmed instructions.

The other stunning thing about the Atlas robot is the fact that it can fall once subjected to unexpected external force but it does not stay down. It has the capacity to get up without help and continue with what it was doing prior to the fall. The demo that was used to illustrate this, however, showed a mat beneath which is suspected gave the robot a thrust. The real strength and capacity of this humanoid cannot be determined with precision but both developers and other parties have confirmed that it is way better than its predecessors.

In as much as Google is showing off the Atlas Robot, the management admitted that it will be a while before they can be able to get any earnings from it. It is, however, an invention that represents the next generation of robotics. It is suspected that in the near future, these robots and more advanced ones will be used in different departments within the government. The first department expected to adapt the use of robotics is in defense in carrying out investigations in areas that are extremely risky for humans. Others include law enforcement, medical and surgical equipment handling and disposing of hazardous waste materials. According to tech news, robots are already being used in detecting and detonating bombs and this has been embraced because it eliminates the risk of losing human life in the process.