Maraimalai Nagar is a suburb of the southern Indian city of Chennai. Maraimalai Nagar and its surrounding areas are referred to as “New Chennai” due to recent industrial development around this area. It is a Satellite town developed by CMDA. Many heavy industries are located in Maraimalai Nagar. 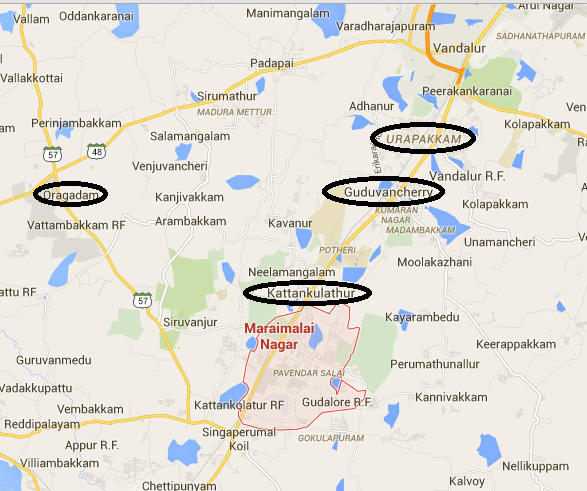 Maraimalai Nagar located strategically along the GST Road (Grand South Trunk Road), around 10-12 km from Tambaram. The location also enjoys proximity to the industrial belts of Oragadam and Sriperumbudur.  The location also offers good connectivity via a well-developed rail network and by roads such as the Tricky-Madurai – Kanyakumari Highway. Due to this several factories, such as TAFE, Seimens, Ford, and educational institutes such as SRM University and other engineering colleges have established here. From the Chennai city Maraimalai Nagar is situated 40 kms far. The Chennai Outer Ring Road project, a 30km-long six-lane road connecting Vandalur with Nemilicheri is expected to fuel more growth in Maraimalai Nagar.

Maraimalai Nagar location zoomed into prominence as a real estate destination after the setting up of the Mahindra World City, Infosys and Ford manufacturing unit.

The suburb is close to SRM University and its group of institutions: (Valliammai Engineering College, SRM School of Management, SRM Medical College, SRM Hospital, Valliammai Polytechnic, SRM Polytechnic, SRM Institute of Hotel Management, SRM Arts and Science, SRM Pharmacy) which are located in Potheri, 2 km from Guduvancheri. Some of the schools in the locality are such as JRK Matriculation Higher Secondary School, Maraimalai Nagar Government School, St Joseph Higher Secondary School, etc. Hospitals in the vicinity are such as JS Hospital, Surya Hospital, etc.

Property Law 101: How To Qualify For Mortgage If You Have Bad Credit