In The Miller, Chaucer goes in depth to describe the characters of his story before going into more detail. The way that he describes the characters actually alludes to their place in the story.

The first description that is used in The Miller is when the Host discredits the Miller because he is drunk. One of the descriptions that he uses is that “he could hardly sit on his horse.” (Chaucer, 147) This is Chaucer’s way of sort of telling his reader that what is to come may be offensive by using the seemingly credible Host. He does this in a way so that the reader almost expects something out of the ordinary to follow, and they would just assume it was because the Miller was drunk and a fool, not the work of Chaucer. On page 148, the Miller states “whoever does not wish to hear it, turn over a leaf and choose another tale,” which is another way that Chaucer frees him self from any possible criticism he could get from writing this story. 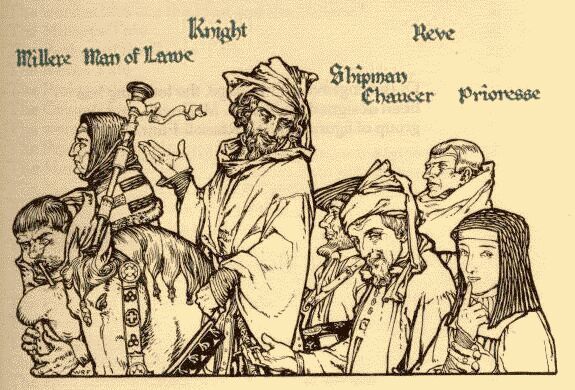 Nicholas is described as a more or less a smart lover who depends on others. He is shown to be sweet by the phrase “this sweet clerk” which foreshadows him being a good person in the story, and also shows him to be book smart. (Chaucer, 151) The fact that he “was sly and very discreet” and also that “he knew all about secret love” helps set the tone for him being a lover. In fact I think it is important for the reader to understand Nicholas first so that when the carpenter and his wife are described, it is seen that Nicholas seems to be destined to have an affair with Alison. When you see the great effort that Nicholas puts in to get Alison to pledge her love to him, you can tell that he is going to be going after her the whole story. It is because of these unfaithful actions that Chaucer gave his warning at the beginning of the story.

The carpenter is described as “jealous” and you can tell right away that he is going to be fighting off other men. (Chaucer, 151) He is old, which foreshadows an affair because Alison is said to be young. The fact that he is old allows makes the reader think that maybe the marriage is not a good one and Alison’s decision to marry him was probably based more on the carpenter’s status. The carpenter however is shown to also love her “more than his life,” which shows him as being a good husband, but also makes the reader this that something is bad is going to happen to him since he is so in love with this “wild wife.” (Chaucer, 151) The fact that Nicholas is described as “pleasant Nicholas” also makes him appear to be a very likable character. (Chaucer, 152) He is described to be so likable however; that the reader can easily see that it would be easy for someone to use this to their advantage to get with his beautiful wife.

At the first mention of Alison, you can tell that she is going to be cheating on her husband because she is described as “wild and young.” (Chaucer, 151) She also is described as being very beautiful, with very colorful descriptions such as “She was more of a treat to look at than a pear tree, just come into bloom.” (Chaucer, 152) This description furthers the reader’s presumptions that this girl is going to be the central conflict in the story.

Absalom is “lively and playful” and cast “many loving look” on them. (Chaucer, 154) This shows him as another lover in the story, and his description also shows him as a conflicting lover to Nicholas. The way that he described however also shows him as a good person looking for a lover. He is described as a ladies man because he can “trip and dance twenty different ways” and he would visit all the taverns “if there was a gay beer maid there.” This picture that is drawn of him makes him seem very likely to get a girl in the story, however it is the fact that he is trying so hard to get these woman that Alison does not find him appealing. The description of him going out, and trying to entertain the ladies, may also be used to show that he may be trying hard, he is not attractive to women.

To create his story, Chaucer uses very vivid descriptions to introduce his characters. The manner in which he describes these characters is meant to make the reader see them in a certain light. They not only help you to see what is bound to happen, but they also help to make the story very imaginable as you can just imagine what the characters look like in your mind.

How to Set Up a Bank Account for Your Child

How To Identify And Avoid Investment Scams

The Consequences of DUI: Understanding the Legal and Personal Impact of Drunk Driving

5 Things to Look for in Vacuum Parts

The Ins and Outs of Commercial Roof Installation: Understanding the Different Systems and Choosing the Right One for Your Building

A Few Things To Remember When Starting a Business

Working With the IRS? 5 Helpful Tips For a Smooth Experience

4 Keys That Will Improve Your Traditional Marketing Strategies

Owe Some Back Taxes? Don’t Panic, Here’s What to Do

Qualities to Look for When You Need Insurance

Types of Consulting Services You Should Hire for Your New Business

How To Save Money on Your Company’s Electric Bill

Please accept the terms of our newsletter. Please input your email address. That email is already subscribed. Your address has been added.
Education

How to Engage and Educate Special Needs Students